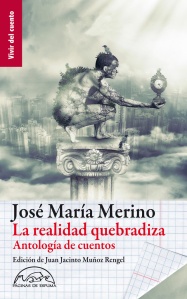 José María Merino’s La realidad quebradiza: Antología de cuentos is an anthology of short stories from a writer who in his fiction has explored the fantastic as a way to break open the fragile reality surrounds and paradoxically for something so ephemeral traps us. While not particularly well known in the English speaking world, he has published a steady stream of fiction since 1976 including novels, short stories, and children’s books, and has won several awards, is a member of the Real Academia Española, and amongst fans of the short story is a respected figure. Although he has not exclusively focused on the fantastic, it is, perhaps, what he is best known for, with stories ranging in style from horror to science fiction to meta works that hearken to Borges, Kafka and Cortazar. With La realidad quebradiza: Antología de cuentos, Páginas de Espuma has put together a career spaning overview of his work amongst the short form that not only includes a large selection of short and micro stories, but a lengthy if rather strange introduction to his work from Juan Jacinto Muñoz Rengel, and a long interview with Merino that examine his approaches to writing short fiction. It is probably as a good an introduction as one could ask for.

The fantastic is difficult material to work with: too obvious and you have the literary equivalent of a Twilight Zone episode where the camera changes at the last second and you say, ‘oh, I get it now,’ but then never return to the episode because the shock has worn off; too subtle and it ventures into the purely symbolic (perhaps surrealistic), where nothing has any relation to reality. Merino’s own working definition of the fantastic would be helpful before going on much farther:

I agree with Roger Caillois’ modern definition of the fantastic: a resounding rupture of habitual order of things, textually “a burst of the impermissible in the unalterable breast of the routine laws of everyday.” Something altogether different would be the marvelous where the apparently impermissible is the rule, such as in fairy tales or The Lord of the Rings, but without a doubt I’m not blessed with that skill because when it comes time to write, reality is lying in wait for me too much.

For Merino, the fantastic is that little explosion of unreality in an otherwise real world that opens new perspectives on reality. What it isn’t, is fantasy which is more concerned with its own fictive reality. It is an important distinction because the interplay between reality, which is often described in a realist tradition, and the fantastical can occasionally seem jarring. However, the shock of the rupture in the habitual that he mentions usually overcomes the Twilight Zone moment. And as you will see, there is a great fluidity in his writing that can make the occasional disappointment worth reading.

El niño lobo del cine Mari (The Wolf Child of the Mari Theater) is perhaps the best story in the collection in terms of a pure mix of a narrative and the fantastic. One day when an old movie theater is the process of destruction, the construction workers find a little boy amongst the ruins. It turns out he has been missing for 30 years yet has no aged a day since he disappeared. It is a mystery, but despite all pleas to tell his story the boy won’t explain what happened. In desperation, the doctor looking after the boy takes him to another theater. It would stand to reason he likes movies. The doctor watches him carefully at first, but caught up in the movie she doesn’t see him go behind the screen and enter the movie where he disappears again. Here, Merino mixes the two streams of reality, that of the everyday and that of the cinema, locating our dreams not just in the films themselves, but in the portals to them, as if they formed a kind of collective memory that lasts as long as the movie does. Moreover, he expands the idea of a fiction not as something that you only observe, but as something you participate in and extend. It is that extension of the story, or the bifurcation of the story into multiple paths, that reappears throughout the book.

You can see that bifurcation La casa de los dos portales (The House With two Entrances). In the story a group of boys break into an old abandoned mansion. After exploring the house they find a small passage way to an a room that has its own door to the exterior. They go through it and head to their respective homes. But nothing is right. Family members who were dead are alive or vice a versa; homes are not kept in the same ways. In short, it is a parallel world, one that is terrifying to the boys. That parallelism also links back to the idea of the double, of the other self, a classic trope in Spanish language fiction, but here it extends to a whole world.

Both stories come from his collection Cuentos del reino secreto (Stories from the Secret Kingdom) published in 1982. They show an interest in stories where the line between reality and the fantastic exists, but is not a commented on within the text. In his latter works, his short stories are much more open to direct introspection of the limits of reality. In El viajero perdido (The Lost Traveler) and Bifurcaciones (Bifurcations) he explores the way linear construction of reality is really a series of forking paths (to quote Borges) one takes, but are also mental paths one takes as they construct the narrative for themselves when they remember.  El viajero perdido follows a writer as he tries to create a story about a traveler who he stumbles on one night. The story though twists between what the writer struggles to write and the trip his wife is having. With each new strange encounter he comes up with it is mirrored in his wife’s world. As he brings the story to conclusion she comes closer to home. And with in the wife’s world she comes across the traveler that first promoted him to write the story, bringing the different bifurcations of story together. Merino leaves the story open as to what will happen, as if stories can never be finished.

In Bifurcaciones, a middle aged man is invited to a college reunion. He begins to wonder what ever happened to a girl, Pilar, he had once been infatuated with. He wanders down by where she used to live and he runs in to her. Feeling lucky, they spend some time together and he thinks his dreams have come true. Then she begins to ask him why he never wrote after ‘that summer?’ He has no idea of what has happened, but she creates a whole different life they led together. Yet he begins to believe it, rewriting his past. Yet when he finally goes to the reunion she’s not there and yet another bifurcations of the past occur. Merino places layer after layer of bifurcations so that man is rewriting his past and going through memories of events he never had. With each memory he recreates his whole history summed up towards the end of the story when he tries to make sense of the differing stories he is living.

His effort to clear up the contradiction of those opposing summers made him understand that the meeting in the vestibule was a mysterious point of bifurcation where his memory seemed to hesitate, although after following with more certainty the road that took him to a period of agonizing apathy, to his first jobs, to his joining his uncle Jaime’s firm in a southern city, to the meeting with Pilar and everything that flowing from the day that he received the invitation from Carlos Campoy, seemed to form the true plot of his life during those twenty five years.

Finally, it would be remiss if a few comments about his language were overlooked. In more than a few stories the role of language itself is the center of story and even in one story when a man looses his ability not only to speak, but think in words, he disappears from reality. So for a writer with such wide ranging interests it would be natural that he prose have a certain power to it. In Papilio Siderum, a story that reworks Chuang Tzu’s story of the butterfly where a man dreams he is a butterfly then wakes as a man is unable to tell the distinction between the two. In Merino’s telling the story takes on a deeper and wider celebration of the paradoxes of memory and he captures both the transitory nature of memory, but the beauty in it to (sorry no translation; I’m out of time).

While every story in La realidad quebradiza: Antología de cuentos didn’t excite me as these did (a couple were too much in the ghost story vein, something I’m not much interested in), on the whole is a successful mix of the fantastic and reality, and the majority of the stories are fascinating reads. The selection of these short stories and micro stories, almost prose poems at times, which I didn’t even have a chance to discuss, leaves me wondering what other intriguing work remains in the volumes that these stories were selected from. Merino is definitely a maestro of the fantastic and Páginas de Espuma has put together an excellent collection to demonstrate that.