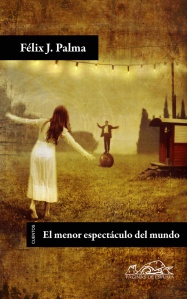 Félix J. PalmaThe Spanish novelist and short story writer Félix J. Palma is probably best known as a thriller/sci-fi/fantastical/historical fiction writer who’s The Map of Time spent some time on the NY Times best seller list. I’m not sure if how well any of those categories work in describing him, but his 2010 collection of short stories El menor espectáculo del mundo (The Smallest Show on Earth) is in a different vain, focusing on the little details of life, the smallest show on earth. However, that smallest show tag is a little misleading because several of the stories are adventures that are just confined to a small space. Still, Palma is attentive to the disappointments and unsaid despair that surround his characters and command of language, expressed in elegant sentences and solid images mark him as a skilled writer.

His skills as a writer are apparent from the opening story, El país de lasMuñecas (The Country of Dolls):

At that time of the night, the playground looked like a cemetery where childhood had been buried.

It is an arresting image that begins a story of a girl who looses her doll and her father, like Kafka, writes the daughter a letter each day as if he were the doll. His reinvention of the doll story parallels the story of his failing marriage and the fable for the girl becomes not only the dream that will never be realized for the child, but it is an illusion the father would like to have also. But the doll story is just a story and the narrator can only wish for what he cannot have. It is a typical strategy for Palma to show the illusion of these little shows and then leave the characters aware that those illusions are not real. While The Country of Dolls blends his power of language and his appreciation for literary culture, it also ends disappointingly as the narrator, in crime fiction fashion, destroys the destroyer of his illusions and kills his wife.

Palma also has a good sense of humor which he shows quite well in Margabarismos. The narrator is a looser who has taken to spending his time in  La Verónica a dive bar near his home that his wife will never search for him in. One day, he sees a note on the bathroom wall that says he will be hit by a car. He doesn’t believe it, but as he leaves the bar a car hits him. He wakes to see his wife waiting for him and he realizes they have grown apart and he would like her back. Once he gets out of the hospital he returns to the bar’s bathroom to look for the message. It has changed, though, and the writer is his late uncle who has the power to see the future six months of the narrator. They hatch a plan to win his wife back and each step displays a humor based on the clumsy desperation of a man who wants his wife back and has to depend on an unreliable ghost. Without the humor–the idea of finding messages in the bathroom–the story would be flat. Again, Palma takes the desperation of the lonely man and turns a comic ghost story into a moment to explore relationships.

He develops that same theme in Una palabra tuya a story that starts with the narrator’s wife’s last words before leaving the house: can you fix the lamp. When he goes into the closet he gets trapped and through a series of events his daughter ends up being the captive of the desperate upstairs neighbor. Ultimately, he performs his role as a father and saves the child. When his wife returns she says, couldn’t you have fixed the lamp? Of course the joke is he has scaled a wall, saved his daughter, and evaded a crazy woman, just like a superhero. And like the smallest show on earth, the narrator has gone unnoticed.

The best story of the Bibelot  takes that hidden heroism of the every day and gives it a less adventurous spin. An encyclopedia sales man finds himself mistaken for the son of an old woman. He doesn’t want to play the role but when she said he hasn’t been by for her last few birthdays he relents. He knows he’s making her happy until her daughter calls. She tells him to leave immediately because her son is dead. He agrees and apologizes and on his way out he meets a neighbor who tells him the daughter also died. Here, again, he has a character doing a simple act, one that is inconsequential to everyone but the old woman. In this story it is not just one person participating in these little shows. It is the most successful story because it avoids the episodic feel that some of the earlier mentioned stories. It also has an excellent ending that is neither a twist or a joke. It is his most humane story.

All of Palma’s stories have excellent writing and show a good story teller in action. His ability to show the human failures that go unnoticed, although occasionally hit with a misplaced levity, is strong. With these strong stories it would be great to see more of his non “genre” writing.