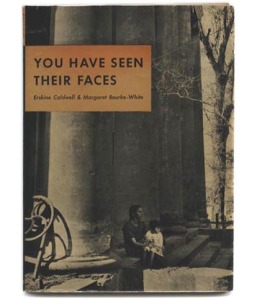 You Have Seen Their Faces was a radical book in its time. Perhaps it would still be if time didn’t make it easy to say, good thing things aren’t like that now. The Great Depression started over 80 years ago, and distance between the images, the clothes not only out of fashion, but archaic, the Dorthea Lange-like scenes of run down shacks have long passed from the  landscape, and the chain gains that were common place of the south no longer exist. Still there is something in the book that is more than an earnest examination of the conditions and remedies of the depression in the south, something that resonates today. It is a book that tried, despite its flaws, to describe America not only as it tried to deal with economic hardships, but the color line to paraphrase W.E.B. Dubois. 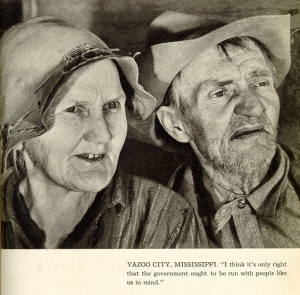 In You Have Seen Their Faces Caldwell and White attempt to document the lives of share croppers and tenant farmers in the deep south. Although the Great Depression was the impetus for the work, Caldwell shows a broader interest in just the poor. He isn’t out to document just those who’ve been thrown off the land during hard times. He want’s to see what is the root cause. What is it that perpetuates the endless lives of poverty and toil without hope that afflicts both white and black farm workers.

Caldwell delivers his criticism over a series of chapters describing both the sharecropping and tenant farming system. In his hands they are nothing more than virtual slavery. For black farmers it is slavery in all but name. The farmers had to borrow from the plantation store to start the farm, naturally they would  become indebted, and if they tried to leave local law enforcement would force them back to the plantation for failure to pay. It was a system for black farmers that offered no hope of escape. For white tenant farmers there was almost as little hope. They were a little bit more free, but they always owed money and, according to Caldwell, were given worse land than black farmers to foment racial tension.

Charges such as those are what make the book strong stuff.  His best insight on race is the about the channeling of the poor white rage towards blacks who were poorer, but held up as a menace that had to be put down. And for all the repression the white farmers were just as poor. Juxtaposed with quotes from whites that are predictably concerned with justifying lynchings, beatings and the imposition of Jim Crow, his analysis is extremely harsh, and for the times, strong. One of that generation’s great failing was the covering over of racial problems, something that would have to wait until the 50s for the starting of any form of broader acknowledgement. Cadwell for sure, did not hesitate to describe the system.

Caldwell was a good observer and knew the conditions of the farmers well. For a modern reader, one of the thing that catches his eye is the destruction of the land. He describes how the tenant farmer is given a piece of hill to farm and at first he gets a descent crop, but after a few seasons the unprotected soil is washed away and nothing is left but sand and futility. Top soil was a big problem during the depression, as it is today. It is that kind of detail that makes the book resonate still.

The photos, as you can see from the two included here, are arresting, part of that depression era style that seemed to find the deepest crags in even the youngest faces. They are, for the most part, documentary in nature and do show the hard living that ages people prematurely. There are more than a few pictures of shacks that are papered with magazines or newspaper pages. In all the photos from the era and earlier, though, you have to be careful with assuming something is of the moment, a true spontaneous moment caught on film. And it is to the credit of the book the White describes her process (and every single camera she used), which in most cases is anything but spontaneous. Usually Caldwell would talk to the participants for a while, often an hour or more, and when she saw the image she was looking for she took it. There is a reality in the images, but it is consciously composed.

That composure leads the weaknesses of the book. The first, and most egregious, is the captions for the photos. As the authors clearly state at the beginning of the book they are not quotes from the participants, but “are intended to express the authors’ own conceptions of the sentiments of the individuals protrayed; they do not pretend to reproduce the actual sentiments of these persons.” The quote in the above photo isn’t too bad, but some are just dumb, and at worse paternalistic and playing on stereotypes. The ones of African Americans sitting by a river with the caption “Just watching the Mississippi roll by,” seems the most egregious.

It is that paternalism that weakens the book, diffuses its strength. Caldwell is writing an essay about the south, something he knows well, but he doesn’t have the voices of the south. He holds it distant, talks about it in the plural. Occasionally he comes in close to describe a farmer but he can’t stop from analyzing and ultimately offering a solution (something along the lines of farm support, which was introduced but in practice did not reach the people he was writing about).

Still the fundamental problems of the tenant farmer have been transferred to the migrant farmer and the shacks given to them. Agricultural slavery? Try the tomato industry in Florida (Tomatoland: How Modern Industrial Agriculture Destroyed Our Most Alluring Fruit

). Times have changed, photos to color, but the  issues remain.