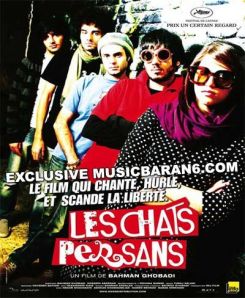 No One Knows About Persian Cats is a delightful film about musicians in Iran just trying to play music they like, mostly rock, and a totalitarian state that refuses to let them. The film is ostensibly about two indie-rock musicians who are trying to put together a concert for their friends and family, and also get fake passports so they can flee the country to play a show in London. They travel around Tehran trying to put together a band and talking with different musicians in Tehran’s underground music scene. Accompanying them is a promoter who is the ultimate wheeler-dealer with a fast tongue that makes his living bootlegging alcohol, selling pirated and forbidden CDs and DVDs, and otherwise brining his black market sensibilities to the music world. The quest allows the film makers to show the great lengths the musicians have to go to play. Every time they go to a new space it is down a warren of staircases to a forgotten basement that will muffle the music and keep the police away. One metal band even plays at a dairy farm amongst the cows and hay bales. Despite these great lengths it is a world of fear and every musician has been jailed at least once for playing music. All the musicians, except for the rapper, play music that is completely apolitical and in a few cases lacks words, yet the government will not allow almost any form of rock to be played. It is the tension between the musicians simple desire and the politics is one of the primary things that makes the movie compelling.

The other thing that makes the movie so interesting is the music. Sure it is all infuenced by American and European rock and hip-hop, but that is part of the fun. And all of it is very good. There are 2 blues rock bands, one with a female singer with an great voice; 2 metal like bands that are full on hard-core with double bass drums and chorused guitars; a couple jazz jam bands; an indie-rock band; a folk singer; and a hip-hop group. All of these get a couple of minutes to play a song and while they play the film becomes a kind of rock video showing montages of Tehran and its street life. The best performance is from the rap group which performs a great song that indicts the state for the disparities in wealth in Tehran while the montage show scenes of people living on the streets. The raping style and the music are aggressive and underscore the seriousness of their critique. The female fronted blues band was also very good, but what made it even more compelling is everyone in the band was filmed out of focus, mostly likely for their own protection. It was a haunting song set to night scenes of Tehran.

The film might have a bit of the Andy Hardy series of films where Mickey Rooney and Judy Garland put on a musical in a barn, if it weren’t for the political consequences of what they are doing. It is in the political tension and the liveliness of the music that the film is at its best a is a fascinating look at Iran. Definitely worth watching, especially if you like music.