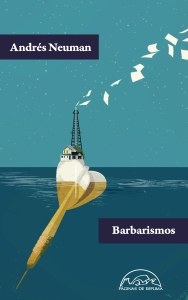 Anyone has followed this blog will know that I am a fan of Andrés Neuman’s work. He has an incredible range of impressive writing working in novels, short stories, short essays, and editorial work with the short story. (He writes poetry, but I’ve not read it.) To this list we can add Barbarismos his personal dictionary. In Spanish, the title refers to the linguistic concept of using a word incorrectly or include an expression from a foreign language in Spanish. From this starting ground he has created a dictionary of alternative definitions. Ambrose Bierce’s Devils Dictionary is the most obvious example to an English speaker, although Dr. Johnson’s dictionary with its love of opinionated definitions is a cousin. In these alternative definitions are humor, notes of satire, and the exploration of writing, all written with a subtly and insight that make the book a fascinating exercise.

With respect to his definitions about writing and literature, he tends to look at them as a process, both of finding yourself reflected in a work and creating the work as you interact with it. For Neuman there is a constant interplay between one who is working with a text, either in writing it or reading it, and the text itself. This interplay gives a mystery and elusiveness to a work. He’s not facile about this interplay, instead he sees in it a kind of epistemological relationship between an person and what they can know. At the same time, he sees it as a collective enterprise that has no leader, but is organic. His take on politics is humorous without being particularly caustic. Certainly there are jabs at patriotism and religion that go beyond the day to day frustrations of living in a democracy that doesn’t quite live up to its ideals. He’s at his best here when he takes down sacred cows, as he does with patriotism and his definition for flag.

Ultimately, Barbarismos succeeds as a book because Neuman’s way of finding the vital truth of a word is spot on, showing him to be an excellent observer and a clever writer. While he does play with words (see imán), many of his definitions I think would appeal to readers outside the English language. One would hope that some day a few more of these would appear in English.