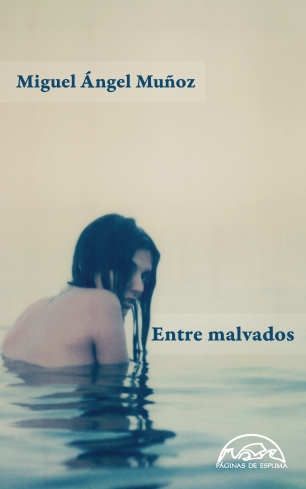 Entre malvados is the Spanish author Miguel Ángel Muñoz’s third collection of short stories, and represents a return to the short form after two novels. His recent work has been concerned with the intersection between art and identity, best expressed in his last book, the transgressive La canción de Brenda Lee. Entre malvados marks a change of direction towards stories that are concerned with recent history, not necessarily political, but engaged in the events that have shaped recent Spanish history. The title is quite clear in stating where his focus lies; however, the stories are richer and more ambiguous explorations of recent events than a simple reading of the tile might allow. It is also worth noting, that several of the stories were either written or started almost a decade ago. Their collection here, though, does seem well timed.

The stories fall into two general camps: ones that deal directly with an event; and ones that are more generalized sources of evil. In the later, Somos los malvados (We are the Wicked), the first story of the collection explores the origins of cruelty and how it propagates itself. The story is simple: a man is abused as a child by local bullies. As an adult his daughter is taught by one. All he has to do is spread rumors about the teacher and he will get his revenge. Obviously, the condemnation of bulling is there, as is a recognition of its power. But there is more here, more than a tale of satisfying revenge. The means of achieving that revenge is a new propagation of cruelty.

In a similar vein, Los hijos de Manson (The Children of Manson) is an exploration of evil, both extreme and commonplace. Muñoz describes four people who in their own ways brought evil to those around them. The firs is the  strange power of  Charles Manson and his manic evil. The  second is the mob killer known as the Iceman who lived with his family in middle class normalcy, but was vicious in his professional life. These two are traditional killers, evil men most people would despise. Then Muñoz turns to the father of the Enlightenment, Rousseau who is monstrously cavalier in his raising of children, giving them all away and convincing himself they would be better that way. Finally, he takes on Arthur Miller who refused to see his son who had Downs Syndrome for his whole life. The contrast between all of them is quite large, but it underscores the general theme of the book. The inclusion of Rousseau and Miller makes for a more nuanced collection and makes it difficult to say, of course they are bad.

Aguantar el frio (Putting Up with the Cold) is a transitional story, one that plays against the back drop of the real and the general. The story follows a cop who is looking for a missing girl. He’s seen this happen before, but in that case he found the girl after she had been killed. He won’t do it again. On a tip from the girl’s neighbors he arrests and brutally beats one a different neighbor. He won’t fail and he knows who did it. It’s just a mater of time before he gets to the truth. At the same time, his son has lost an eye in one of the big government protests in Madrid that happened during the height of the economic crises in 2009-2012. He doesn’t want anyone to know that. He is ashamed that his son has turned out the way he has. It is a classic crime fiction dilemma. Here, though the cop is blinded by the past, his own zeal, an the inability to understand that the same people he wants to protect are being damaged by the government he works for. Moreover, we have echos of the first story, Somos los malvados, that suggest the revenge that felt good in the first story, is perhaps being abused by the neighbors. It is an effective story about the tunnel vision and over application of the lessons of the past.

There are two stories, Los Nombres (The Names) and Un hombre tranquilo (The Quiet Man) that deal with the March 11, 2004 bombings at the Atocha train station in Madrid. Muñoz intended these stories to be part of a larger collection of voices of the event. In each he writes about the last few hours before the bombings. In Los Nombres he describes a man who is having his second child and is about to transition between a soccer playing good time guy, to a dedicated father. Un hombre tranquilo Muñoz  creates a kind of musical journey, as the protagonist surveys the train as he listens to El ultimo habitante del planeta. Its almost a montage from a movie. Where the Los nombres celebrates the life outside the train, Un hombre brings a kind of beauty to the every day. In each Muñoz finds the good and beautiful in the routine. The two stories show his strongest writing in a technical sense and make full use of his skills as a writer to get inside the lives of those who died.

Intenta decir Rosebud (Trying to Say Rosebud) is his most ambitious story. Based on the Spanish journalist Javier Espinosa’s account of his captivity as an ISIS prisoner, builds a compelling account of life as a prisoner and, more importantly, what life is like after the experience. There is more to the experience than survival and the continued reminders that even the simplest things in daily life are difficult moves the story from war to aftermath and touches on Muñoz’s general theme of the continual presence of evil. The actual depictions of life in the prison cell are chilling. The title is both a nod to Citizen Kane and to the power of art to calm. One of the prisoners tries to remember scenes of movies as a means of escape. Kane is his favorite movie and just remembering Rosebud offers him something outside the room. Intenta decir Rosebud is the most brutal and arresting story of the collection.

Entre malvados is a fine collection of stories. While they do give a sense of modern life in Spain, the traumas and the politics, they are more than just newspaper cut outs. There is a search for the darkness in everyone, and what makes the best us overcome it, if even temporarily. After such a long absence from the short form, Entre malvados is a welcome return for Miguel Ángel Muñoz.