Taschen’s Menu Design in America is a fascinating collection of 130 years worth of American menus from restaurants and private parties. While the book is marketed more as an art and design book(Taschen’s primary focus), it’s also a great look at how American’s have eaten in public. The earliest menus are utilitarian and surprisingly large, offering often ten types of hot meat and as many cold meats, along with a little seafood, a couple vegetables  usually of the potato variety, and some deserts. By modern standards its both a surprising number of options with meat and a very limited vegetable offering. Moreover, meats were presented on menus in the manner they were cooked, rather than the preparation of the dish. Boiled as well as roasted beef seems to be on many of the early menus at the same time. As restaurants became more common and served a broader range of clientele, the number of offerings tended to slim down, although not always, especially in restaurants serving a thousand clients at a time (it is hard to imagine such a place today since that style of eating has gone out of style). However, the food stays essentially in the meat and potatoes form for quite some time, with the occasional addition of canned tomatoes, and corn. One tradition that would be interesting to see come back is how desert is handled up through the 20’s. Usually there were two categories: pastry which is what we commonly call desert now, and desert which was an assortment of fruits and nuts.

As you can see from these images, the art work reflects each era quite readily, often in its sexist and occasionally in its racist incarnations. Reading the menus form Chinese, Mexican and other ethnic restaurants will show just how much American dinning has changed as much of what is on those menus is no longer served any more. While all eras represented have an occasional use of whimsy, it is’t until the menus from less upscale restaurants of the 30’s and especially the post war period begin to appear that the humor and gimmickiness that has been associated with American eating of the second half of the 20th century appear. The earlier menus are much more refined, aimed at a wealthier group who excepted a refined experience, even if the food doesn’t seem it now. Where as restaurant eating became a much more common thing, the mid century exuberance for all things commercially inviting shows up in most of the menus. It makes for an intriguing contrast between the aspirations of both refined and common place of diners, and naturally with an American beset with foodies and celebrity chefs. It is a contrast that makes the foodie revolution just that more impressive. 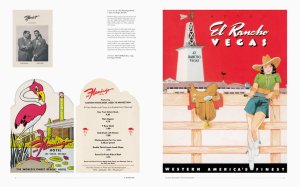