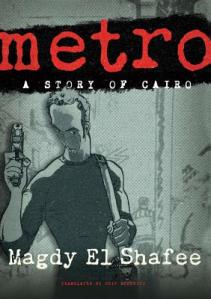 Magdy El Shafee’s Metro: A Story of Cairo is the much anticipated publication in English of the Egyptian author’s banned work. When published in 2008 it was banned for “offending public morals” and remains banned despite the change in government. The offending public morals is one of those classic phrases of despotic regimes and rarely do the artists condemned with those words actually offend anything but the regime’s sense of invincibility. Given the profound changes that have swept over Egypt in the last year and a half, Metro, which was written and baned several years before those events, has taken on not only the voice of protest it has always had, but also a document of the problems that led to the Arab Spring.

The story itself is rather simple: two young software developers Shehab and Mustafa who get shafted on a business deal by a corrupt businessman. They are broke and a friend of theirs, an old man, tells him he is going blind. The two men decide to steal the money using their electronic know-how. It fails but on the way out of the building they come upon a government official demanding a payoff from the head of the bank. In one of those great lines that catches the flavor of the whole book the banker says,

Collateral, your excellency? What collateral? You honor us by taking our loan…

Running parallel to the story is a murder that the boys witness and try to solve . The murder brings them into the ins and out of corruption. The police are untrustworthy, the press is week, and no one seems to care. At one point the one of the boys says,

People are numb. Nothing has any effect on them. They put up with so much, they just say. “Well, that’s how things are in this country of ours.”

And to illustrate that the last third of the novel breaks out into a violent protest march that is  broken up by government thugs pretending to be protesters. It is a prescient part of the book, foretelling the types of protests that were to happen a few years later.

Shafee’s Egypt is burdened down by corrupt politicians, unreliable  police, businessmen who’ll cheat you every chance they get knowing there is no recourse to complain if they are connected, and an economic system that is so dependent on payoffs that it is virtually impossible to start a new business. When the young men try to sell their software they are completely blocked by inaccessibility to funds and corruption. Their only hope is to steal, or to immigrate. To show this complete collapse of possibilities their friend, an old merchant, has given up and has taken to begging. But his begging is just as corrupt and what he says has nothing to do with his economic circumstances. It is impossible to trust anyone when the only way to succeed is to cheat, to steal and to lie. It is a truth that not only fills almost every encounter in the book, but one that Shehab will find even destroys his closest illusions.

Metro is written as a noir with  Shehab narrating in much the same way. He opens the book saying, “We’ve spent our whole lives in this cage, but two weeks ago, when the bars began to close in, things became clearer. Our eyes were opened and we made a decision.” Shehab is a modern outsider, both a hacker and a ninja-like figure who welds a staff like Bruce Lee, one of his heroes. Since computing can be mysterious hacking makes for the perfect type of priestly warrior, one whose special skills allow him to combat the abuses of society. He is a mix of Batman, Philip Marlow, and a Shaolin monk. It can be a stultifying image, one that takes away from the brutal realities he is describing. What saves the book is that almost no one gets what they want. As with all noir the power isn’t necessarily in the reality, but the but the power to show all the corrupt elements of a society at once, even if that creates mythic heroes that lead to their own escapist fantasies.

The art work of Metro is much like that of the cover photo. Occasionally, a guest artist will do a page or two in a completely different style. Many frames are rough and still have the original pencil tracings. It all leads to an impression of a hurried and unfinished place. He also shifts his style to accentuate the comedic as when he draws the beggar in his comic moments. The most polished moments are during the protests when the wide sweep of violence are shown in sweeping gestures, more abstract and more brutal. They were the most effective sequences in the book.

Overall its a fascinating book that still has its roots in the comic, but whose power comes from criticisms. It will be interesting to see if without the urgency of the times, the story will still stand up and not turn into a noir that does not have the power to evoke a society on the edge.

You can read an interview with Shafee at Arab Lit in English.