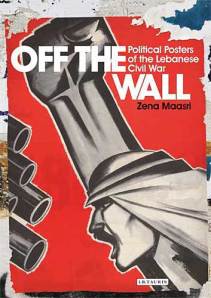 Off the Wall: Political Posters of the Lebanese Civil War

Every war has its own aesthetic. As bad as it sounds to equate art and style which often had a connotation of beauty and goodness to war, the need to solidify group membership, demonize the other, and provide a vision of the future with its implicit sense of triumph, lend themselves to symbolic interpretation through art. The poster in the modern industrial world is a cheep, quick and disposable medium that has been one of the most common ways to mix art and war. Even if a faction could not afford radio or TV, the poster was available, and that ease of production has left many enduring images that shape the impressions of a war. For Americans, the Uncle Sam I Want You Poster from World War I or Rosie the Riveter from World War II, are as important to the iconography of those wars as a trench scene or raising the flag on Iwo Jima.

It is with these ideas in mind that Zeina Maasri approaches the 150 posters that make up the richly printed collection from the Lebanese Civil War. Maasari finds in the posters reflections of an aesthetic and a politics that were unique to Lebanon. While she notes that the posters may seem at first similar to the propaganda posters of the wars of the 20th century whose goals were to inspire and demonize, the posters in Lebanon, due to the sectional nature of the conflict, were more focused on establishing control and marking territory. Since the lines between combatants were not always marked out clearly, the posters became a means of showing areas of control and describing who was in power. At the same time, the posters performed their traditional role of forging group cohesion. Moreover, Maasari points out that politics in Lebanon for at least the last half of the 20th century was marked by factional dynasties that provided leadership for each group, and whose leaders passed leadership from father to son; thus, the posters often served the dual role of emphasizing the role of the leader as the head of the faction and reminding the view of the faction’s strength. Finally, religion is an important element in many of the posters, especially as the Shiites moved away from the traditionally left leaning parties to the religious.

From these elements which Maasri outlines in a series of insightful chapters that mix the history with posters, the reader can understand not only what the posters mean but their context. Providing context is not a simple task when describing the Lebanese Civil war. The shifting allegiances, numerous parties, and different leaders make it difficult to follow the evolution of the war and the posters. However, Maasri provides a brief introduction to each faction (although she might have noted their general tendencies, such as left, right), a chronology of the war, and an in depth discussion of the posters. Her discussion is broken up into four themes, leadership, commemoration, martyrdom, and belonging, each of which is given its Lebanese context. The chapter on leadership is probably the most helpful, since it is difficult to know who all the iconic leaders are. It also helps to understand how the parties were led by dynasties. The chapter on martyrdom probably is of most interest outside of the civil war. While Maasri sticks only to the war, the concept of martyrdom is comes up in the news, and her explanation of how the various parties developed the posters from almost simple funeral announcements for soldiers killed in battle to symbolic representations of the dead, complete with drawings of the act.

Most of the posters are available on-line at the American University of Beirut, but unless you can read Arabic or the occasional French, it will be hard to understand what is going on in the posters. If you are even a bit interested in the subject the book is worth a read. The only draw back of this otherwise well written book is the first chapter which is an example of everything that is wrong with modern academic writing. I read it, but it was painful and, worse, not really needed. Maasri’s analysis of the posters explains her thesis quite well and is much more palatable. You would do well to read the the chapters after the theory section and pay special attention to her detailed analysis of most of the posters. You will come away with a detailed understanding of the symbols of the factions in the civil war, so of which, like those of Hezbollah, still are effective.