Duras’ The Seawall is one of her earlier works about Vietnam. Published in 1950, as the French empire was about to lose its eastern possessions (Dien Bien Phu was four years away), it captures an empire that had long begun to fade. Set in the mid 1920’s, Duras’ Vietnam is a place where one does not go to make a better life, but rather suffer in miserable penury.  Written at a time when France had been convincing itself that the empire was critical to hold on to, it is powerful work full of cynicism that both questions the social and political dimensions of the colonial project.

Much like The Lover, the central focus of the The Sea Wall is a young woman Suzanne, who has no prospects and whose mother seems intent on marring her of to someone of wealth. It’s a purely commercial transaction, one where Suzanne’s mother in her struggle to eek out a the smallest living, places little value on her. Suzanne has agency, though, and her vacillations between the men who wish to buy her and her search for someone who she wants, give the novel its liveliness and its edge. Suzanne is certainly no prude, although she is a dreamer, her head filled with the dreams found in movie theaters. She lets one suitor, in what becomes a commercial transaction, watch her shower. Druas is frank in her depictions of the back and forth between Suzanne, her mother and the men, and it’s what lets Suzanne breathe.

Duras has sympathy for Suzanne’s mother. While she wants to essentially sell her off, she is a woman beaten down by the illusion of the empire. Moving to Vietnam with her husband to teach, she ends up a widow with two kids trying to run a plantation. The land though is worthless and despite trying to build a seawall to reclaim some of the land she’s in debt to the land agents who knowingly sold her worthless land. She slips into anger and bitterness, always hopping she can rebuild the wall. But its futile. The seas come back every year and salt the land and make it unusable. For her, the dream of an empire where you can go strike it rich don’t exist. For most colons life in the colony is all hard work and little gain. Your only hope is that some rich person who’s well connected and made their fortune years before, will connect you. For the average colon, the question is, why stay in Vietnam anyway? Suzanne’s mother never asks the question, but a reader sure will.

If one can’t make it on their own, finding a someone with means is the answer. Scenes of wealth and extreme disparity run throughout the book. Monsieur Jo, the dandy, is the most obvious example. He offers Suzanne gifts, drives around in a large chauffeur driven car. Her description of the large city (possibly Saigon) near the farm gives you the sense of the differences.

As in all Colonial cities, there were two towns within this one: the white town-and the other. And in the white town there were still other differences. The periphery of the white town was known as the Haut-Quartier—the upper district, comprising villas and apartment buildings. It was the largest and airiest part of the city and was where the secular and official powers had their places. The more basic power-the financial—had its places in the center of the white town, where, crowded in from all sides by the mass of the city, buildings sprang up, each year higher and higher. The financiers were the true priests of this Mecca.

Duras does describe the Vietnamese and the poverty they are subjected to. She also describes a Malay servant, the Corporal, the family has. Stylistically she her writing changes when she describes them, moving from a narrative, to a set piece of description, where the lives of the people are not voiced, but aggregated. Its telling the her description of the city is written in the same way. It makes it even clearer the Vietnamese are an after thought in any French plans, and the layer on layer of oppression dehumanizes everyone. So much for bringing civilization to new lands.

The Sea Wall is an impressive work and is a good start when looking for literature of colonial collapse. 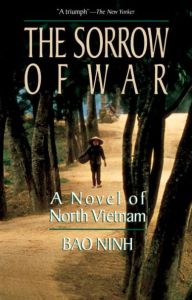 If you are coming to Bao Ninh’s The Sorrow of War after seeing his interviews in Ken Burn’s The Vietnam War, as I did, you may have the impression that you are picking up a war novel. It certainly is that, but it is also something more: an exploration of the toll war takes years after.  Ninh’s comments during the documentary made it clear he had doubts about the wisdom of the heavy losses the Vietnamese suffered during the war. Reading the novel, it’s clear he has been unconvinced for a long time. Published 15 years after the end of the war, it is a raw book that has no illusions about patriotism or heroism.

The Sorrow of War is three novels: a story of war;  the struggle to survive PTSD; and the aftermath of war. Each is interrelated, obviously, but in each he gives you different registers that show a narrator who has survived not only years of war and a post war that only reminds him of war, but who is  completely damaged. Structurally, Ninh has written the novel as a series of unconnected episodes, moving between the war, his days as a relatively happy youth, and the nightmare of the war. The narrative arc for much of the book isn’t that important. Instead the glimpses of the war and his PTSD laced nightmares are woven throughout. The narrator is giving you impressions of a dazed mind. Much of it is quite clear, but in a very narrow view as if his mind is hyper attuned to precise details. In survivors accounts you often see an attention to the immediate detail as the intensity of the experience sharpens their memory. This pervades much of the book and gives it an impressionistic feel, as if we are watching a mind attempting to process what has happened.

When, the narrative is pieced together, The Sorrow of War has the typical arc of innocence, to experience, to dissolution. The innocence is not one of heightened patriotism. The novel follows Kein, a reluctant soldier, naive to its horrors, but at the same time indifferent. What little excitement he has, is quickly lost when the war starts after the Gulf of Tonkin. He spends years in the war, loosing all his comrades in devastating battle after another. It is a savage war that has no quarter, even when he liberates the Saigon airport in 1975 one of his friends dies pointlessly at the hand of a civilian. For Kein, though, the war is not over. He is part of a MIA and graves registration team that goes through the country looking for the dead and missing. Even after the war, the war hasn’t ended, and highlights the complete devastation that the war left. It is from this nearly 15 year long immersion into killing comes the compulsion to drink and write. In general, the arc works well, except for one small issue I’ll come to latter.

The story arc I’ve pieced together is not linear at all. Moreover, Ninh frames the story in several layers of narrator. There is the author of the fragmentary war stories. Maybe it was someone like Kien, perhaps it is meant to be autobiographical. The unknown author, the one who has created the Kien stories lives in an apartment with a mute woman and writes and drinks. Then he disappears, leaving his novel scattered over the apartment. Here we get a new narrator. He doesn’t know where the Kien narrator has gone. He pieces the novel together. The pages are unnumbered and each page seems independent of the other, he says, which gives the book its fragmentary structure. It is a mostly successful literary device. Given the already fragmentary nature of the book and its continual sense of the futility, to have the author disappear, one more casualty of the war, only seems fitting. The final narrator also provides a closure on the war without having to resolve anything. Did the Kien narrator die? Is war so traumatic there are no survivors? It certainly eliminates any kind of heroic uplift.

Those who survived continue to live. But that will has gone, that burning will which was once Vietnam’s salvation. Where is the reward of enlightenment due to us for attaining our sacred war goals? Our history-making efforts for the great generations have been to no avail. What’s so different here and now from the vulgar and cruel life we all experienced during the war?

Is Ninh’s approach successful? I ask because although the first 2/3 of the novel is fragmentary, impressionistic, the last 1/3 is a pulsing narrative that follows Kien and his girlfriend as war breaks out. It is the longest sustained writing of the book and it is horrific, detailing an American bombing of a troop train, and his grilfriend’s rape at the hands of some train workers. It could be easy to dismiss this as laziness on the part of Ninh: an author who couldn’t sustain the full novel. However, Ninh is a better writer than that. He has used different registers to suggest a mind unable to focus on a coherent narrative. Kien can describe specific traumatic events, but he has no overarching sense of story. Why else does the organizing narrator say he had a hard time putting the book together? A war that long and brutal with that many dead is too difficult to make sense of. This is something Hemingway even picked up on in The Soldiers home 70 years before. Personal experience needs to be welded to a larger narrative or it fragments, as it does for Kien.

The Sorrow of War is a successful novel. The only element that seems a little much is the rape. Kien’s reaction to it, definitely complicates the man, but it has, given its placement in the book, the effect of dropping something as traumatic into the middle of the story without really exploring it. That aside, Ninh has constructed a solid novel of war and aftermath that is as brutal, dark, and hopeless as any of the classics of the genre.